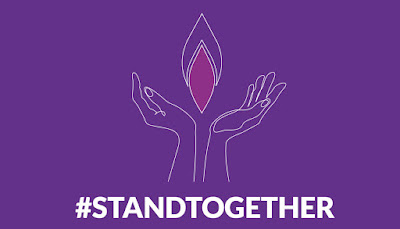 27 January is Holocaust Memorial Day. This year 2020 also marks the 75th anniversay of the the liberation in 1945, by the Soviet army, of the Nazi death camps at Auschwitz-Birkenau.

The theme of the Holocaust Memorial Day 2020 is 'stand together'.

Nearly 14 years ago I stood in front of a museum case in Poland containing beautiful hand-stitched baby garments. I was a visitor in the museum site of Auschwitz-Birkenau. I stood and wept. Some mother or grandmother had lovingly prepared those garments for a child who probably never lived to grow out of them or may never have worn them. Were they confiscated when a carefully packed suitcase was emptied on arrival at the death camp. So much hope for the baby's future must have gone into those stitches.

Were those loving stitches wasted when the hope for that particular child died? Maybe not. As a mother and grandmother, as I stood by that display I felt for a few moments that I was the mother or grandmother of that baby for whom the garments were made. I understood something of the horror of that place. That baby could have been mine. There is something about babies that unites people across cultures, religions and ethnicities. A baby can be a symbol of hope, of the possibility of a new start, of a way by which God saves the peoples of this world.

As I wrote 10 years ago in Holocaust Memorial Day it was not the railway track, the huts, the vast area covered by those 2 camps, or being led with other tourists into a gas chamber, that got me. It was the baby clothes. I can still see them in my mind's eye and seeing I weep again. It was seeing those baby clothes in Auschitz that opened my eyes and heart to lament the Holocaust and subsequent genocides around the world. So this Holocaust Memorial Day I want to #stand together: