Showing posts from 2015
Show All

Come Emmanuel - God with us 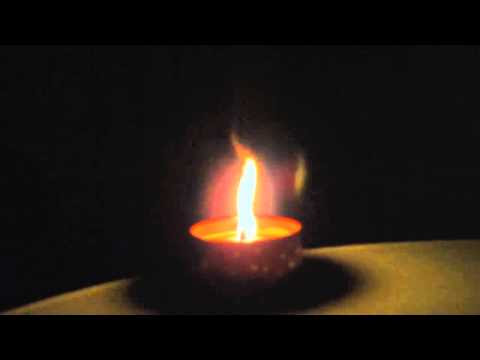 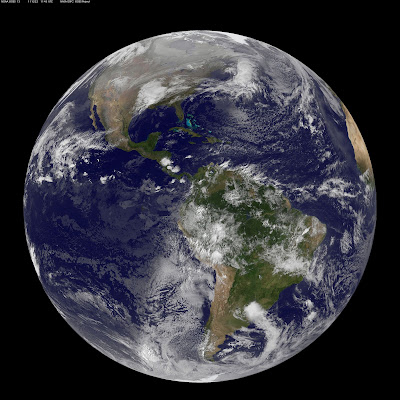 Today the winter solstice happened.
(Summer Solstice in Southern Hemisphere.) It was at 04. 49 Greenwich Mean Time, so I'm told. That was when the North Pole was tilted furthest from the sun, giving those of us who live in the northern hemisphere the longest night of darkness and the shortest day of light hours. I had to look this up as usually in the UK the shortest day is 21 December. I spent yesterday thinking it was the shortest day but it wasn't. It's today, as it often is here. The winter solstice varies between the 20th - 23rd December. A 20th December solstice is rare. The next one is due in 2080. The last 23 December solstice was 1903 and the next is due in 2303. I won't be around to see those!
I looked for the winter solstice sunrise this morning.
It was just after 08.00 but there was no sun to be seen for the clouds. I have to take the sunrise on trust. It is light now, but rather gloomy light. I'm one of those people who longs for the light in the winter a…
2 comments
Read more

Prepare the way of the Lord 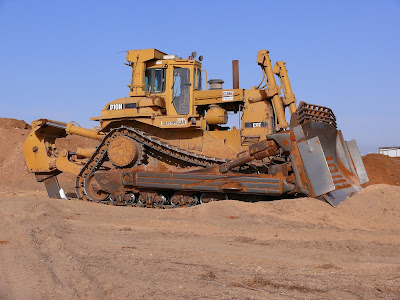 What was it like 2000 years ago trying to build smooth roads and straight paths through rough wilderness ground? Hard enough to maintain local paths, but if you were a Roman Emperor needing good roads to keep an empire under control, then every obstacle in the way had to be dealt with.

The Palestine province of the Roman empire had some rocky hilly places where roads were needed for armies on the march and for traders to travel. A lot of shovels and a lot of hard work by thousands was required to maintain the ancient routes and build new ones. How many slaves or forced labourers died in the process I wonder?

When roads are built now, there's a lot of work, but bulldozers and huge earth moving machinery can make a big impression in short time.

On the 2nd Sunday of Advent the church prepares for the coming of Christ by remembering the message of John the Baptist. I think he was a bit of a human bulldozer. By that I mean that he made an unforgettable impression in a short time, not beca…
Post a Comment
Read more

On the need to be seen to be doing something 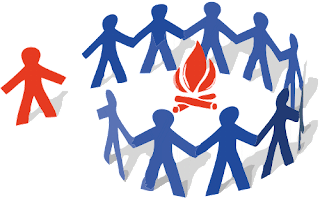 The propaganda used on both sides for recruitment into the military during the 1st World War relied heavily on the need of potential recruits to be seen to be doing their bit and avoid the stigma of being called cowardly or unpatriotic.

I am wondering how the need to be seen to be doing something may influence decisions made today in 2 particular areas:

Climate ChangeSyria
1. Climate Change
There was an impressive turnout of world leaders at the opening of the Climate Change conference in Paris at the start of this week. Given the global importance of climate change…
4 comments
Read more

The Lord's Prayer for Paris and the world 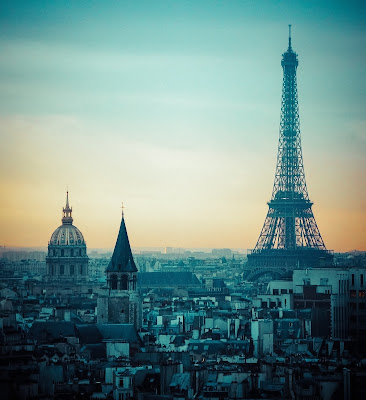 You can find my initial reaction to attacks in Paris on 13 November 2015 in yesterday's post.

Paris 13 November 2015 and not meeting violence with revenge 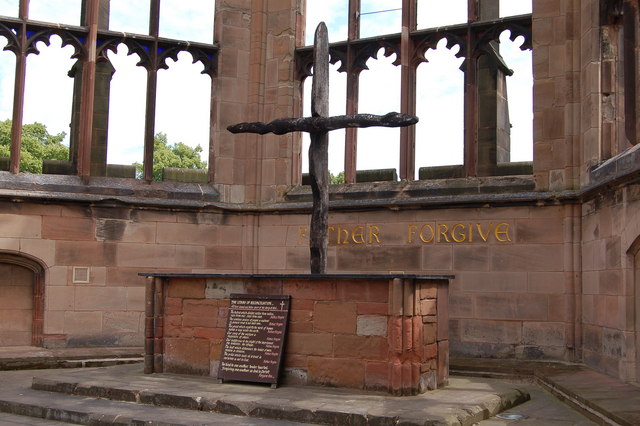 Today is the 75th anniversary of the Coventry blitz during the 2nd World War. The following day the Provost of Coventry Cathedral stood in its ruins and spoke 2 words,
"Father forgive".These words are now engraved behind the Altar of Reconciliation in the ruins of the old cathedral. Kathryn Fleming, Canon Pastor points out in her blog post 'From Coventry to Paris' those 2 words, "Father forgive" is a sentence with no object so to pray that is to avoid pointing the finger at 'them' but instead to pray for us all:
'It's not "Father forgive THEM" - projecting the violence and hatred out to the other, and thereby justifying acts of reciprocal violence and vengeance...Rather "Father forgive" is a prayer for us all - for the many ways, great and small, in which we wound one another and mar God's image in us day by day.I can't imagine those words were universally popular in the city, as people emerged from air raid shelter…
Post a Comment
Read more 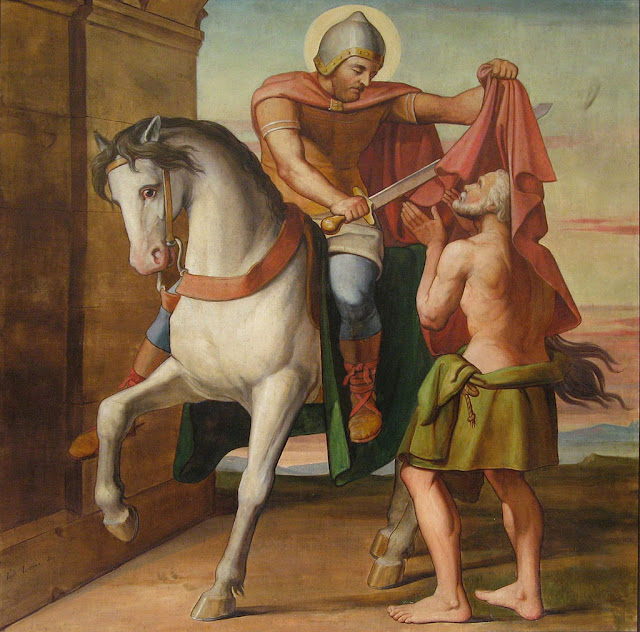 The Armistice that ended the fighting of World War 1 on the Western Front, between Germany and the Allies, came into effect at 11 am (Paris time) on 11th November, a date which coincidently is St Martin’s Day. I am not posting about Armistice Day today but you can see a previous post on that theme in Armistice Day 2014. Today I'm concentrating on St Martin.
Who was Martin? There are several people known as St Martin. The Martin remembered today by Catholics and Anglicans is Martin, Bishop of Tours, the patron saint of beggars, soldiers and conscientious objectors.
Martin was born about AD 316 in the Roman city of Savaria (now Szombathely in Hungary) but spent his childhood in Italy. His father was a tribune, a senior cavalry officer in the Roman army. His parents weren’t Christian but Martin was attracted to Christianity because of Christians he met. As a youth he wanted to be baptised, but was deterred because the law required he follow his father into the army. That was a problem …
Post a Comment
Read more 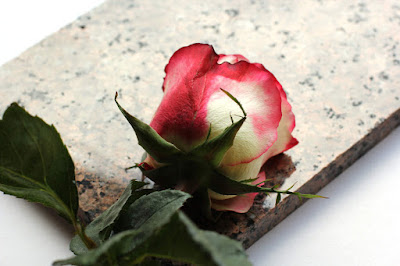 After my mother died, more than 2 years ago, one of the things I found hard was not having a funeral that included the presence of her body and its final committal for burial or cremation.

This was as a result of honouring her plan to donate her body for medical education and research for an indefinite period of time after her death.

We held a Thanksgiving and Memorial Service which was beautiful and helpful but inevitably lacked the sense of closure that a burial or cremation can help to give. I wrote something about this last year in a post entitled 'On Not Having a Funeral'.

Since then 'life goes on', the initial rawness of grief has passed. I can talk about my mother without crying. The memories of her last dying weeks are more balanced now with memories of earlier years. I have mostly avoided thinking about how long the wait might be until my mother's mortal remains are cremated, mainly because it is has been uncomfortable to think about  what medical students a…
6 comments
Read more 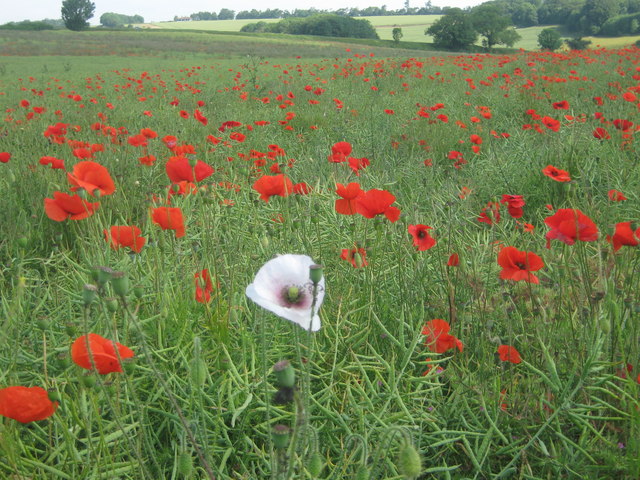 'In Flanders fields the poppies blow, between the crosses, row on row.'
Blood red poppies, symbols of lives lost in bloody battle, of bodies disfigured, of families shattered, ... but a sign too of new life in war-ravaged soil.
The red dissolves to white as the blood is drained.
White poppies rise, symbols of lives lost as a consequence of war, of bodies maimed, of families broken, ...  but a sign too of peace, of hope, of working together across the barriers for justice, forgiveness and reconciliation. 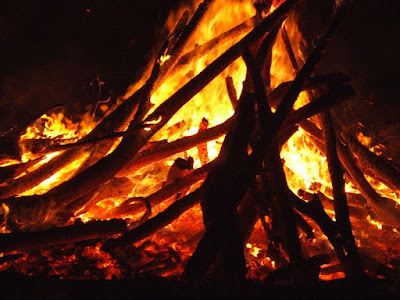 5th November seemed such an exciting day when I was a primary school age child.

In the few days before 'Bonfire Night' there would be the making of the 'Guy' and the building of the bonfire on which to burn this effigy of Guy Fawkes, one of the conspirators of the 'Gunpowder Plot'.

At school we usually painted Bonfire Night pictures. At home there would be a box of fireworks bought by my father in readiness for dangerous fun in the garden after dark, when rockets were precariously balanced in milk bottles ready for launching into the night sky. Usually the weather was cold and often wet but it all seemed worth it and surprisingly, but thankfully none of the family suffered burns. Like most pet dogs, the dog hated it. For more of this see 'Please to Remember the 5th of November'. The remainder of this post is adapted from what I posted last year. 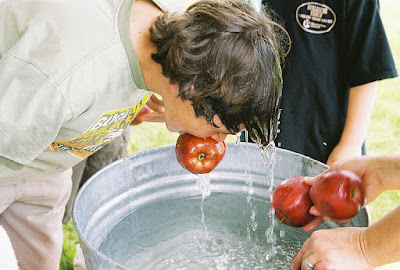 The Halloween celebrations of my childhood seem so innocent in retrospect, as indeed they were.

For a start they were very low-key. Bobbing for apples in a bucket of water without using hands was about as dangerous as it got at the Sunday School party on 31 October. Well, I suppose a child could have been drowned if there had been someone there of such evil intent or if the supervision had been lax.

Passing round a paper bag containing 'eyeballs' to feel in the dark was as scary as it got. And when the light was turned on and the eyeballs revealed to be grapes gave reassuring relief.

One year at a friend's house I remember  carving lanterns from swedes (turnips for some of you), standing those outside the door, then running around inside house covered in an old sheet as a group of children pretended to be 'ghosts' to frighten each other. There was much more laughter than fear. 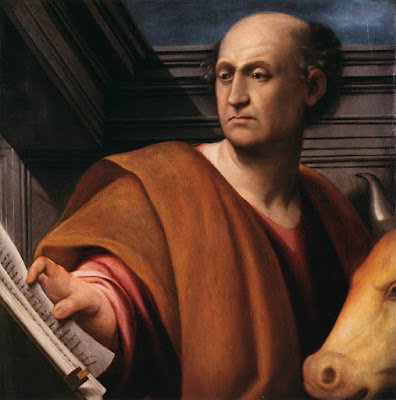 What's the best way to honour Luke the Evangelist and Physician on his Feast Day today?

One tradition is to eat beef. I only discovered that yesterday after we'd already decided to give our lunch guests beef today. The reason for that tradition in some places is that since early Christianity Luke's Gospel (and its writer - the evangelist) has been identified with one of the 4 living creatures around God's throne, described in John's vision in
Revelation, namely the winged bull or ox.

If eating beef and attending a 'red-letter' day church service is all we do to honour Luke I think we miss the point. I suggest that in remembering Luke we need to hear and share his message. Luke's message in his gospel and its sequel the Acts of the Apostles is the message of Jesus, good news for all people, including people seen by others as outsiders.

Jesus' message of God's power to heal, save and set free is what we give thanks for today and Luke's skill and f…
2 comments
Read more
More posts